Not everything I write goes into a book. Here’s a sampling.

The Thrills and Perils of Switching Careers
How I Gave Up The ‘Best Job Ever’ and Became a #1 Bestselling Author. “At the age of 39 I had it all. A loving wife, two fantastic kids, an apartment in New York City, a house in the country, new car, nice vacations, and a high-paying job as Creative Director of a hot creative advertising agency. Everyone wanted to be me. Except me.”
Read more

How To Cure The Sunday Night Blues
I Was Ruining My Sundays by Living in Dread of My Mondays. “It was the nineties. I was stuck in a job that I hated. Guess what was the worst part of my workweek. If you said Monday mornings, you’re close. It was Sunday nights.”
Read more

What is the single insight that most changed your life?
“I began to assault myself daily with that five word mantra. The one that so many of us begin muttering when they find themselves wandering through that unfamiliar, unsettling neighborhood known as midlife. Is this all there is?”
Read more

What is the most unforgettable sentence that someone said to you?
“My wife was three months pregnant. We were in a hotel in Rome. We’d arrived from New York early that morning, pressed on through the day, and by nighttime our body clocks were completely out of whack. At 11 pm I heard my wife get out of bed and go to the bathroom. A minute later she stepped out and said four words I will never forget.”
Read more

Who was the rudest celebrity you’ve met?
“I wish the question were about the nicest celebrity, because as a writer I’ve met a lot of endearing film and TV stars. But as soon as I saw the word ‘rude,’ Lauren Bacall took the prize.”
Read more

Have you ever successfully bribed someone?
“My daughter. She was 20 and a serious smoker. She was on her way to Florence for her junior semester abroad. We were at the departure gate at JFK, and I offered her money to quit smoking. A hundred bucks a week. Don’t tell your mother.”
Read more

Have you ever met an upcoming actor, actress or singer who you knew would go far in their career?
“I was a young advertising copywriter when my art director partner, Andy Langer, and I came up with a life insurance campaign for Mutual Of New York (MONY). It broke the mold for the category. It actually talked about death. (Back then, insurance companies didn’t use the “D” word in their advertising.)”
Read more

What is the cutest mistake you’ve ever seen someone make?
“1999. We were shooting a movie I had written, Just Looking. Billed as ‘a sex comedy for the whole family’ it’s about a 14-year-old boy coming of age in the fifties (and yes, it was inevitably semi-autobiographical). Finding a kid to play the lead was critical. We got lucky. We found Ryan Merriman.” (view the Just Looking trailer below)
Read more

I was pushing 40 when my mid life crisis kicked in hard, and I decided I was going to write my way out of one of the best jobs in advertising.

I started writing night and weekends, and in 1982, my one and only play, Squabbles, was produced in a dinner theatre about a thousand miles from Broadway, got well reviewed, and was published by Samuel French.

It’s been performed in over a thousand theatres around the US and the world, and much to my amazement, it’s still playing today.

With each new book, Joe Donahue invites me to be his guest on The Roundtable on WAMC/Northeast Public Radio.

Joe is a warm, witty, and insightful interviewer, and the yack sessions often turn into laughfests. (I think it’s the most fun you can have listening to a writer talking about himself.)

PS—My dog Kylie is under the console for every interview, then hops up on Joe’s lap for a photo op when the show is over. 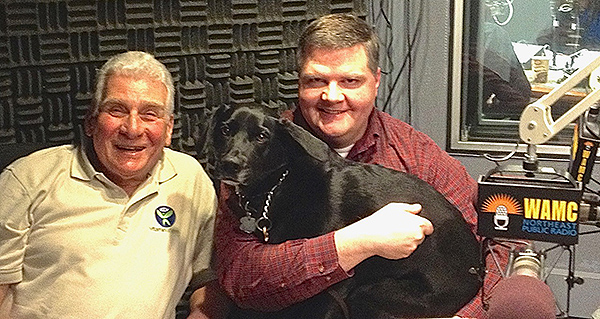 Listen to some samples: