The Thrills and Perils of Switching Careers 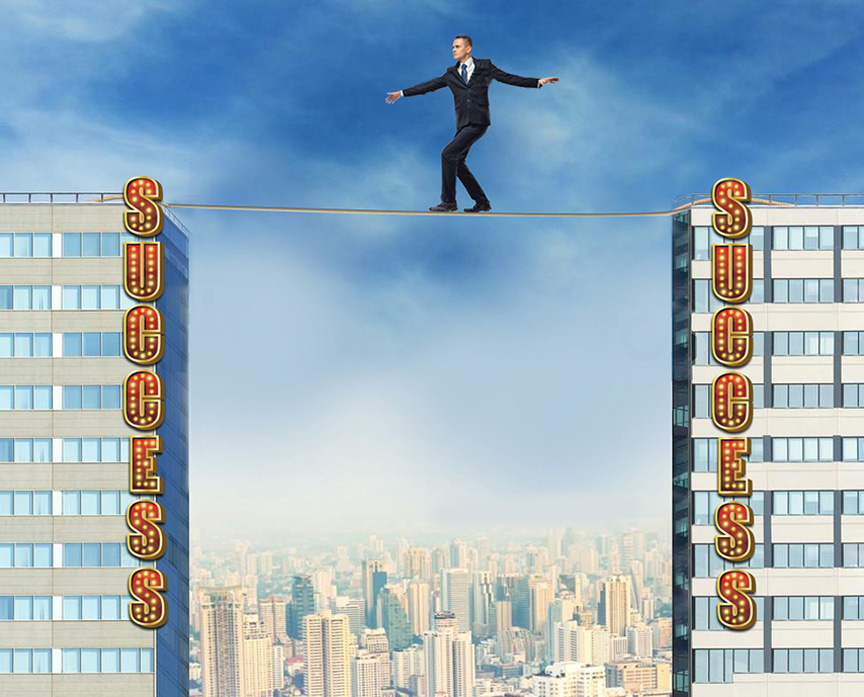 This was me. If it’s you too, read on.
[Design: Dennis Woloch]

At the age of 39 I had it all. A loving wife, two fantastic kids, an apartment in New York City, a house in the country, new car, nice vacations, and a high-paying job as Creative Director of a hot creative advertising agency.

Everyone wanted to be me.

On the outside I was the poster boy for Happy Successful Man Who Has His Whole Future Ahead Of Him. But deep down inside, I was miserable.

You might call it a high-class problem. I called it The Success Rut.

I began to assault myself daily with that five-word mantra, the one that so many of us begin muttering when we find ourselves wandering through that unfamiliar, unsettling neighborhood known as midlife burnout.

Is this all there is?

We don’t ask ourselves that question when we’re 25. It’s still the first quarter of the game. We caught the ball on the five-yard line, and we’re making our way up the field.

But at 39, it’s halftime. Do the math. The average man is going to live till the age of 78. I was officially on the back nine.

I know — your actual mileage may vary. You could get killed falling off a ladder at age 60. Or at the age of 100 you could fall off a hooker. There’s a lot of latitude in The Middle. But somewhere between 30 and 50 you’re halfway done. It’s up to you to decide when to look at the face in the mirror and say:

Is this all there is?

No. There’s a whole lot more. And I’m going to tell you how to get there. Tonight I’m going to send someone to your house. He’s a teenager, about 18 or 19. He doesn’t know much about life — what teenager does? But he knows what’s cool. And after talking to you for a couple of hours, he’s going to be able to zero in on what’s a cool new direction for you to head in.

And even though most kids his age can’t project past the weekend, by the end of the evening this guy is going to completely outline and plan the second half of your life. And that’s what you’ll do. Trust me, it will be cool.

What’s that you say? That’s the dumbest damn thing you ever heard? Why should you let some teenage kid with no world experience plan the second half of your life?

My answer is, why did you let him plan the first half?

You want to know how my first half was planned? I was just out of college. I liked to write. Why did I zero in on advertising? With so many avenues to explore, why did I pick Madison?

Because my girlfriend at the time was a copywriter at an advertising agency. Decision made. Life course charted.

This rut you’re stuck in, this life you’re trapped in, who planned it? Not you. Not the YOU you are now. Most of us form Life Plans shortly after high school. Maybe we’re 18, maybe we’re 22, but for the most part we’re still kids. And once that kid makes a choice, we stick with it.

That was my insight. I was pushing 40 and still living the dream of some teenager. He didn’t exist anymore, and yet I was still following the path he’d laid out for me. I decided it was time for the 40-year-old me to start rethinking his decision.

To his credit, the younger me had gotten one thing right — at my core I’m a writer. But in advertising, the punishment for being a good writer is to promote you and pay you more money to stop writing and start managing. I went from jeans to suits, spent a lot more face time with clients, and supervised a hundred people. I was pretty good at it, but I missed the thing I loved doing most. Writing.

So the grown-up me made a decision. I would somehow extract myself from the corporate rat race and carve out a new career writing the stuff I always dreamed of writing.

Today I’m a recovering rat who has written dozens of TV shows, a play, a feature film, and ten books, five of them #1 bestsellers coauthored with James Patterson. 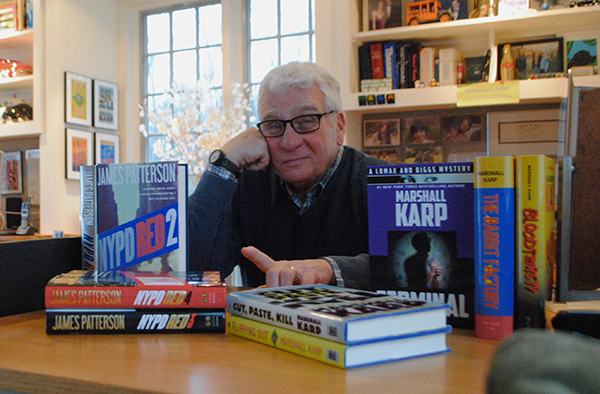 Marshall Karp with some of the fruits of his midlife crisis. (Not visible in picture: His dog, Kylie, under the desk.)

I often get asked how I did it. The short answer is, do you remember that movie with Steve McQueen where the Allied POWs spent years digging their way out of a German prison camp with a spoon? It was like that.

I started with a basic reality — I couldn’t afford to take a swan dive off the Success Bridge and hope there was water below. I had to hang on to my day job and slowly write my way out of advertising.

I knew it would take years, but once I made the commitment everything changed. I no longer felt trapped. Instead of spending my weekends dreading Monday mornings at the office, I spent my days looking forward to writing in my off hours.

I wrote a play that got produced in a regional theatre, found an agent who pitched the play to ABC as a sitcom, and I wrote the pilot. It didn’t fly, but now I was an ad guy by day, card-carrying WGA TV pilot writer by night.

When one of my pilots got picked up for series, the studio offered me a job on the show. I said no, and it crashed and burned after six episodes. But the television business has redefined the concept of failure. I was now a writer whose pilot went to series. My price went up. I was plummeting my way to the top.

There’s more. Lots more. But I’ll stop here. Because my way won’t be your way. There is no formula. But if it helps you get started, I can pass on a few lessons I learned along the way.

It’s Not You. It’s The Ladder. — If you’re not happy where you are, look up at the next couple of rungs. If they don’t excite you, find a new ladder.

Don’t Quit Your Day Job Just Yet. — They say you can’t cross a chasm in two small jumps. They’re wrong. For the first five years I straddled two careers: the old one that paid the bills and the new one that fueled the dream. Don’t jump till you have a place to land.

Pain Is Inevitable. Divorce Is Optional. — I spent two years in Hollywood because that’s where the jobs were. My wife and kids stayed in New York because that’s where our lives were. I worked with legendary TV writers. My name was on the screen every week. I was on the cusp of a seven-figure job. But they were the worst two years of my life. My wife was three time zones away, and I was raising my kids by phone, fax, and FedEx. I gave it all up and returned home. Transitions are a constant juggling act. Always focus on the one ball you never want to drop.

Yesterday’s Career Is Tomorrow’s Safety Net. — Don’t be afraid to go back to your old career. I did. TV jobs dried up in New York, I hated LA, so I went back to advertising, caught the dotcom wave, opened an Internet advertising agency, and sold it five years later. #Lemons/LemonadePrinciple.

If You Do It Right, You Will Be Happy For The Rest Of Your Life And Write An Article On Thrive Telling Everyone About It. — Today I have all the things I had at the age of 39 and more. But this time around I’m deliriously happy with who I am and where I am. I still have dreams for the future, but I no longer wake up in the morning, look in the mirror and ask, is this all there is?

A Final Word: I emailed a draft of this article to my agent and asked what he thought. He called back and said, “You’re making it sound too easy. Tell them how your boss wouldn’t give you time off to fly home and help your son look at colleges. Tell them how your 14-year-old daughter stood you up for your monthly lunch date because she hated quality time and wanted quantity time. Tell them what it was like to live alone in a rented furnished apartment for two years. Tell them how much you spent on marriage counselors. Tell them — ”

“Stop!” I said. “I wasn’t trying to make it sound easy. I was keeping it short. I was asked to write an article. If I added the twenty-plus years of ups and downs, highs and lows, joys and miseries, triumphs and failures, I’d have a book.”

Maybe I will. For now, here’s my thought for the cover. 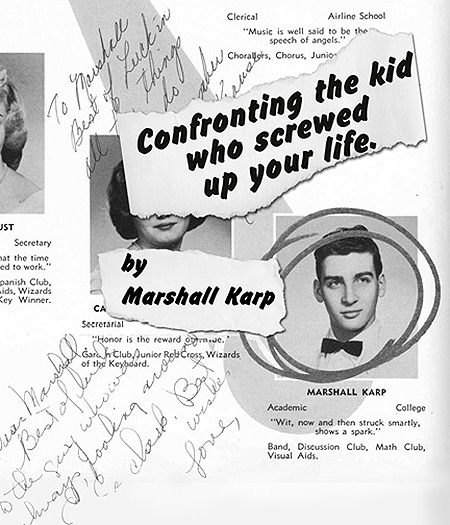 See that kid in the picture? He planned half my life. I was smart enough to plan the other half.