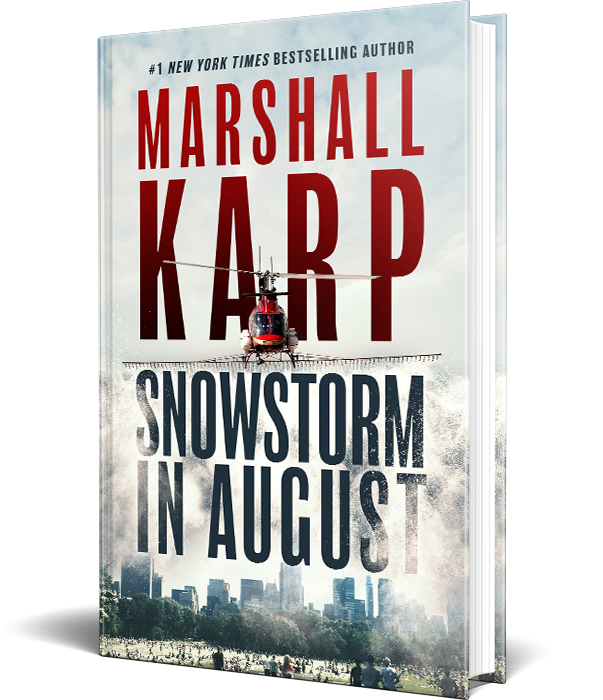 #1 in a new series now available

Four thousand pounds of it. Uncut. Blanketing meadows and treetops. Knocking birds from the sky, dropping carriage horses to the pavement, and cutting a swath of death through the thousands of unsuspecting joggers, cyclists, and picnickers enjoying a summer afternoon in Central Park.

So begins the war between Joaquin Alboroto, the most powerful drug lord on the planet, and his most hated enemy: the city of New York. But the only NYPD unit trained to go up against this level of terrorism has been disbanded, and the new police commissioner is a bureaucrat, not a wartime commander.

The task falls on the shoulders of former NYPD captain Danny Corcoran. A trusted friend recruits Corcoran to a team of top cops—all retired. Funded by four anonymous billionaires, their mission is to stop Alboroto before his next “gift” to the city leaves a million New Yorkers blind.

PRAISE FOR SNOWSTORM IN AUGUST

“Talk about your killer snowstorm. Don’t flake out, but Marshall Karp has written one stone cold mystery!!”
—Al Roker

“Snowstorm in August couples the charm of an unflinching true-crime narrative with an ambitious new vision of America’s war on drugs unlike anything you’ve read or watched before. I simply can’t wait to read more stories with the extraordinary characters Karp has debuted in this extremely enthralling and suspenseful smash-hit!”
—Best Thriller Books (read full review)

“A compelling plot, with characters you immediately become invested in. Marshall Karp writes with the kind of attention to the details of law enforcement that distinguishes a great book from a good one—a rare find.”
—Maureen Mulcahy, Lieutenant Special Assignment, Office of the Chief of Crime Control Strategies NYPD (RET.)

“From the opening chapters with the NYPD strike force that will have you on the edge of your seat, to the globetrotting hunt for informants and information as Corcoran and crew race against the clock, to a wicked curveball Karp serves up near the ending, Snowstorm in August is a highly entertaining, fast-paced read that showcases Karp’s patented rich mix of character and action.”
—Elizabeth White (read full review)